There is a truly striking delphinium plant growing right outside my front door this season. I feel free to offer it such praise because I take nearly no credit for its growth or beauty. I think I remember cutting back the long brown remains of last summer’s growth sometime in the fall, but that’s about it from me. For months the area sat empty and, honestly, ugly. I hadn’t even taken the care to cover the bed with nice mulch. And before I got around to turning on the drip-irrigation system this spring, up began to come the tender light-green leaves, signs that from apparent nothingness, even death, something good was coming. 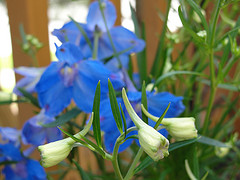 Very truly, I tell you, unless a grain of wheat falls into the earth and dies, it remains just a single grain; but if it dies, it bears much fruit.

Jesus said those words. He spoke the reality of agriculture, but as was so often the case with Jesus, He was unfolding the truth of human experience as well.

Watching my delphinium return “against the odds” has been a meditation for me this spring. It was a grumbly winter in my soul. Mark and I have been married eleven years now, and our boys are nine and six and a half years old. We are well past the honeymoon and also out of the particularly intensive rigors of parenting infants and toddlers. I guess I expected a popping-up of sorts—more energy and camaraderie. Instead I found myself frustrated by an apparent endless highway of days filled with coordinating schedules, and thinly veiled irritation and blaming when breakdown happens, which it inevitably does. I was slipping into the belief that my family was keeping me from “the good life.” If only Mark would help around the house more… If only the boys would stop arguing so much… If only… Grumble. Grumble. Grumble.

On an unsuspecting Sunday morning, however, God stopped me short in my grumbling. Four of the church’s youth were being baptized, and as they were sharing their public commitment to Jesus and His ways, they each shared, from memory, a portion of scripture that has captured them, that somehow marks their early life in God. One young woman began to recount words very familiar to my ears from Philippians 2 about the way of Jesus being the way of humility and service, again and again and again, all the way to death. It is on that path that the surprising burst into life comes.

It’s embarrassing to be caught in such a cliché, thinking that the needed change is in someone else’s court only to find that it begins with you. But I heard God that morning. I saw how warped my thinking had become, and I knew that it was time to start again at the work that I’ve never been good at: to serve and love with a laying-down-my-life kind of love. Commit again to believe the best, to stop the grumbly tape in my head, and replace it with one of thanksgiving for the gifts of the members of my household. Choose to affirm and praise, even in the presence of frustrations. Be the first to apologize. Do the simple tasks that mean the most to each of the guys in my life. Cease—or at least scale back!—on demanding the way that serves me most, and be glad for the good of those around me. Pray blessing.

And, as Jesus foretold and modeled, the way that feels a bit like death, surrendering my grumbling and my need to have things the way I want, results in a kind of life that didn’t even really seem possible six months ago. Of course, we’ve still got lots of daily routines to manage and relational and character issues to battle in our house, but new life has certainly come in a way that is reframing this period of family life for me. I feel a deepening coming on, a deepening that may only be possible in the “middle days” of slogging it through together. 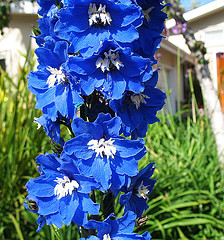 You know what’s especially astonishing about my delphinium plant this year? It’s always wild to me that it returns from nothingness. But, even more wild to me this year, the first bloom reached its peak about three weeks ago, and the plant is at least a foot taller than it was a year ago. I’ve no idea why the growth was so spectacular this year. Perhaps that’s a standard growth principle for delphiniums? Could be. But to my ears, it’s telling a story of hope. God’s not kidding when He says that death brings about fullness of life.

Can you relate to Michelle's "grumbly winter"--a time when the circumstances of your life were not meeting your expectations? How have you experienced death bringing a fuller life?